Thank you for supporting Desiree and Dewlyn's petitions demanding action on the high E.Coli levels in the eThekwini rivers in Durban, South Africa. A massive shout out to the Greenpeace Africa Durban volunteers who helped them.

After the petition was handed over late last year, Greenpeace Africa Durban volunteers were invited by Dr Reggy Cele, Deputy Head of KZN Metros (S.A.), to participate in the panel discussions on the ongoing issue of the highly polluted KwaZulu Natal rivers. Our voices have been heard, and now we are part of our beloved rivers' restorations.

Thank you to over 7000 people who supported and signed our petition. It is incredible what ordinary South Africans and VUMA can achieve together. 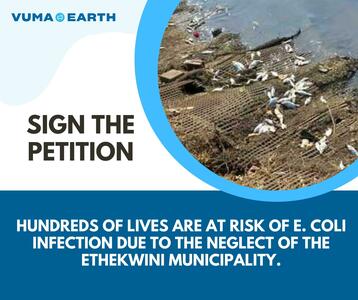 October 2020, after a severe oil spill from the highly polluted Umbilo River, the then M.E.C. for KZN Social Development, Tourism and the Environment, Mrs Nomusa Dube-Ncube, issued a stern warning to the Mayor of the eThekwini region following many independent, and provincial government department testing of the Umbilo River in which all tests came back with dangerously high E. Coli levels.

The M.E.C. claimed that she and her team had been dealing with the situation aggressively and had contacted the Mayor personally to remedy the situation as urgent action was needed in this dire situation. M.E.C. Nomusa Dube-Ncube stated in public that should the eThekwini mayor fail in rectifying this severe matter, legal action will be taken against the Mayor; In terms section of the safety and health regulations that would go to the full extent and would even file criminal charges as her department, KZN Social Development, Tourism and the Environment following the law.

Shortly after that (Nov 2020), M.E.C. Nomusa Dube-Ncube replaced M.E.C. Ravi Pillay as M.E.C. of Finance Kzn, and MEC Ravi Pillay was the new M.E.C. for Social Development, Tourism and the Environment.

Now under a functional government that had the best interest of their constituents or communities at heart or at least made them a priority, the KZN Social Development, Tourism and the Environment department would ensure that if they couldn't fulfil their promised mandate, the next M.E.C. would and the new M.E.C. would hold the eThekwini Mayor and the various departments accountable to the instructions and 'warnings' given by M.E.C. Nomusa Dube-Ncube.

It's pretty evident that the KZN Social Development, Tourism and the Environment department failed or didn't bother to follow an instruction, let alone "the law to the T", as claimed by the then M.E.C. Nomusa Dube-Ncube.

The failure of the KZN Social Development, Tourism and the Environment department and the eThekwini Mayor to fulfil his obligations and promise to remedy the state of our rivers and the high E. Coli or due to sheer lack of will or dereliction of duties has created a Humanitarian disaster which has ultimately led to the death of Durban mother, Rashnie Baijanath, and has left the residents of Mariannhill and Birchwood sick and suffering from diarrhoea.

An environment where lives are lost due to high ecoli is not a safe environment. Section 19 and 20 of the Water Act have also been contravened as no warnings were in place to alert residents of Marianhill and Birchwood of the looming disaster, and the KZN Social Development, Tourism and the Environment, as well as the Mayor, have also contravened Section 28 and 30 of NEMA.

Whilst it is true that in April 2022, Durban had severe flooding and several pump stations were damaged, this can not be used to mitigate their responsibility for the high E. coli levels; we must remind you that high E.coli levels have been present in our river systems and water sources for the past few years as acknowledged by the then M.E.C. for KZN Social Development, Tourism and the Environment department, Nomusa Dube-Ncube, in October 2020 and also in April 2020 in a Greenpeace Africa (Durban local group) petition calling for the Umbilo river pollution and high E. Coli levels to be addressed to urgently.

Dereliction of duty, inept governance, or lack of will to fulfil a promised mandate is killing us.

We demand our fundamental human right as stated in Section 24 of the Constitution of South Africa, "That everyone has a right to a healthy environment, and also the right to have the environment protected from pollution and ecological degradation"!!!!

° We want both local and provincial government to acknowledge their given mandate and act on it.
° We want clean drinking water, not water that could kill us.
° We like clean, healthy river systems that sustain all life.
° We want sewerage pump stations to be repaired or replaced urgently.

Rivers provide water for irrigation, domestic use, industrial use, livestock and wildlife, among other services; without water, there is no life. Clean river water is critical for our survival, sustenance, and a small economy-generating source, especially in South Africa, where job scarcity is a reality.

Many informal traders or fisherfolk use our rivers to generate an income by either fishing, watering community vegetable gardens, stone washing or basket weaving from reeds etc. Rivers or dams are also used for recreational purposes and tourism attractions.

Over the past two decades, our government has failed to maintain basic infrastructure or apply fundamental bylaws to ensure our freshwater sources remain clean and free from pollution and sewerage.

If we don't demand that our government make access to clean water a priority, a fundamental human right, which basic human right will be the next to be degraded, or we also become another death statistic caused by E. Coli infested drinking water??..

Thank you for your support, On behalf of GPAF Durban Volunteers.

Petition is successful with 7,933 signatures