To: Gwede Mantashe, Minister of Mineral Resources and Energy of South Africa 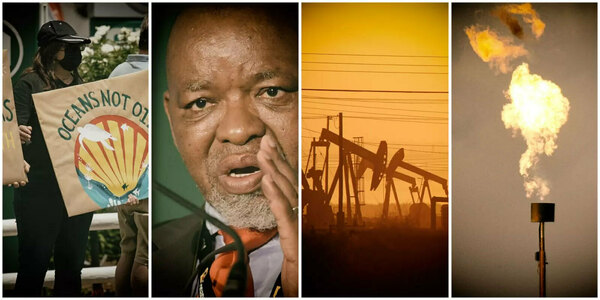 In November 2021, our government released its latest climate commitment under the Paris Agreement. South Africa intends to limit GHG emissions (Greenhouse Gas) and mitigate Fossil Fuels dependency, on what is required globally to reduce global warming and meet the 1.5°C. They were also given billions of rands to help speed up South Africa's Just Transition to renewable energy.

However, Minister Gwede Mantashe has licensed these oil giants to keep South Africa dependent on harmful and non-progressive fossil fuels. He can't break his fossil fuel addiction, and greed has turned his obsession to our oceans.

These oil & gas giants ( Shell, Total Energies, Sasol, Qatar Petroleum, Sungu-Sungu Petroleum, PetroSA, Impact Africa, New Age Algoa, BG International, and Silver Wave Energy), to mention a few, came to us bearing false hopes of economic growth and job creation for our people. Yet, we know that is an old-as-time tale they have used to exploit African people and cause environmental destruction.

As a result of a united court case environmental and human rights organisations filed against Shell in support of local communities, we've come to understand how seismic blasting not only poses a threat to the livelihoods of small-scale fishers but also how it can devastate marine life. Significant concerns are how seismic blasting impacts marine animals, like whales and dolphins, ocean biodiversity, food sources, and small-scale fishers' livelihoods and how it disturbs our ancestors' homes.

Recent research has proved that seismic blasting decimates plankton and can cause irreparable damage to fish species. The 260 dB, equivalent to a jet engine, scares fish species away, causing panic, which also causes stranding. Marine life uses and relies on sound to navigate, find food, communicate with each other, and survive.

The seismic blasting will interrupt the way marine species live and, in the worst-case scenarios, it can even result in death. The research and findings done by Petroleum Agency SA show the extent of these oil and gas giants' current and future seismic blasting plans along the entire South African coastline: To view the image, click on the link >>> https://www.petroleumagencysa.com/index.php/maps.

The fossil fuels industry does not care about conserving the environment and protecting its inhabitants; their only driving force is making more profit, supported by greedy government officials—the same individuals who should be leading South Africa to a sustainable renewable future.

WE CALL FOR A PERMANENT BAN ON ALL SEISMIC SURVEYS ACROSS SOUTH AFRICA'S COASTLINE!

- We urge fellow South Africans to unite, help us protect and call on a permanent "BAN" of all seismic explorations on South Africa's coastline. Stop Minister Mantashe and the oil & gas giants from trapping South Africa in the future of harmful non-progressive fossil fuels.

- It is a big concern that some areas targeted as blasting spots are among the most extensive, pristine marine environment in South African waters, and include significant and diverse marine habitats that protect endangered species (Coelacanths, Natal shy sharks, African penguin) and are essential environmental services.

- The promise of job creation is a fairytale, there are no jobs, and the available jobs are for highly skilled rig operators and workers.

- Small-scale fishers whose livelihoods depend on the oceans will be left without their means to make a living.

- We need to break free from harmful oil and gas dependency and speed up a just transition to renewable energy. Renewable sources are cost-effective and safe for the environment.

- Studies have shown that renewable energy can create about 231 400 jobs up to 2030, which beats the current 120,000 jobs the fossil fuels industry provides for South Africans.